This past weekend (August – 23rd-25th), I was asked to participate in Brand Garage’s competition put on for Sears: Sears Developer Challenge. An instant message a few weeks prior from my good friend Tom Ortega, solidified that I would be joining his team, Omega Ortega, LLC. in San Francisco for the competition. 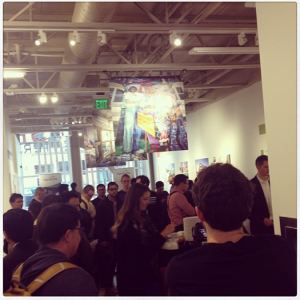 To quickly summarize, the premise of the competition was to take Sears’ brand api’s and utilize them to push traffic, and sales to their site as well as their brick and mortar stores. Scoring would be based on use of the api’s, and the user interface design amongst other points. We were given some of the specs after a hosted meal on Friday night, and brainstormed at a local coffee shop. It wasn’t until the next morning when Rance Patterson, Tom Ortega and I were all sitting at a dining room table of a friend’s house when we finally decided.

We would focus on kids, especially since the 3 of us are fathers.

I began designing the app once we had returned to SPUR headquarters in San Francisco, and did so for the remainder of the day. Unfortunately, I would not be able to stay further in San Francisco, as I needed to return to be with my pride and joy, aka my daughter. My flight was at 730pm so I had to work quickly. Even as I was at the airport waiting for my flight to take off, I was still working and giving last minute assets. During this time, I had a few moments of reflection on my recent personal life, and decided to write a post, protect it, and get the issues out of my head so I can focus on the competition.

The remainder of the evening Rance and Tom took over working on the app. They worked laboriously throughout the night, and stretched themselves to exhaustion. They were doing the impossible, writing a complete app in almost 36 hours. There were some other dev teams that walked into the competition with code already written, some libraries already available to them to use to help them finish quicker. We arrived with a whiteboard and markers. 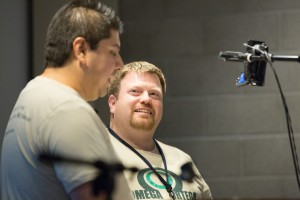 It is now Sunday afternoon, and the time had come for the demo, albeit I wasn’t able to attend, my thoughts were with Tom and Rance. I knew they would present well. Tom is a seasoned veteran in speaking in front of the crowd, and Rance’s technical savvy would be more than enough to impress the audience. There were photos being taken, and 40 other entries being listened to that afternoon. We were all wanting to show what we could do for Sears and perhaps even prove to ourselves how valuable we are professionally, and to the community.

At home that evening, I was lucky enough to be surrounded by my brother, and a few other friends for a bbq. My daughter was playing and entertaining everyone around the house as I got a text message from Tom: 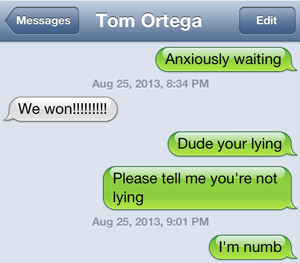 As you can see, I was in shock.

The last few weeks had been massively difficult, and an extreme test of my resolve. For the first time in weeks, I had received some good news. I wish I could have been there at the moment that our names were announced, however, I was able to celebrate it at home, with the comfort of my family and friends surrounding me. Especially with a big hug from my daughter. I was certainly proud of what our team had pulled off. It’s not every day you are offered a fairly large sum of cash as a supplement to finish something creative from your imagination. I was especially proud of my teammates, Rance and Tom, they were the catalyst to getting things completed and they worked themselves, again, to exhaustion to make sure this was completed. They were fantastic, hospitable, and just the people I needed to assist me in getting my head back together in the right direction in terms of work. I am inspired again, I am motivated once again, and I want to do well. I appreciate everything Tom and Rance had done for me, as well as sharing with me that that audience could appreciate that I had to go home to my daughter, which was my reason for leaving and could not be on stage with them.

A small caption from the press release that was made available today:

“Omega Ortega’s grand prize winning entry was inspired by personal childhood memories at Sears and Kmart stores. Anthony Tanaka, Rance Patterson and founder, Tom Ortega, developed The Chore Score app as a fun way to incentivize children to do their chores. With their parents’ guidance, kids can set up a chore list, track their progress and earn rewards for doing their chores that can be redeemed easily within the app either online or in-store.”

You can read more about the results of the competition here in the latest press release: http://online.wsj.com/article/PR-CO-20130827-904436.html

Mobile Marketer had a write up as well:
http://www.mobilemarketer.com/cms/news/commerce/16057.html