I was lucky enough to be on hand for the performance above. Truly epic seeing the Jabbawockeez in person!

Working closely with Reflective Productions to produce this experience, Hip Hop International’s new site was finally released! Needing a major facelift, as well as breaking out of the flash-only site bonds, this site now has a full admin behind it, as well as a much more easily searched available content. With the next events about to happen this Summer, Reflective Productions, and I were able to build out this experience to accommodate the massive amounts of updates, photos, videos, and traffic that would be handled within.

Since its inception in 2002, Hip Hop International was determined to unite the world through hip hop; bridging old school and new, studio and street, underground and commercial. Ten years later, Hip Hop International proudly boasts licensed affiliates in 35 countries with national championships that draw thousands of dancers who compete under HHI’s common rules translated into 15 different languages. With HHI’s early goals and dreams successfully realized, we are committed and determined to set the bar high for the next decade and reach for the stars once again.

Hip Hop International founded in 2002 and based in Los Angeles is the producer of multiple live and televised street dance competitions. Among them are MTV’s Randy Jackson presents America’s Best Dance Crew, the USA Hip Hop Dance Championship, the World Hip Hop Dance Championship, the World Battles and Urban Moves Dance Workshops. Hip Hop International is recognized in more than 100 countries by its broadcasts on MTV and other international networks. 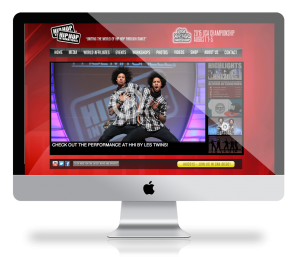